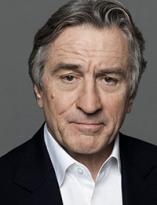 Robert De Niro says that "in movie terms," the country that was once "an inspiring uplifting drama" has turned into "a tragic dumbass comedy" under the leadership of President Donald Trump.

The two-time, Oscar-winning actor made the statement in a commencement speech to Brown University graduates.

Referencing Trump’s campaign promise to shake up Washington, De Niro quipped: "And you know what, now, you did shake it up, buddy. You shook it up real well. But now we have to get back to reality. And you guys have to do it. That's all I have to say. Plus us. But you guys. It's your future."

"Don't be famous for being famous. We have a president now who is here because he was on one of those shows," he said.

"And where are we? There might be people who disagree on that. It's just a nightmarish situation as far as I'm concerned."

"Work to stop the insanity," he advised. "Start now so the class of 2018 will graduate into a better world. Get things back into reality."