Robert De Niro Blasts 'Pig' Trump: 'I'd Like To Punch Him In The Face' 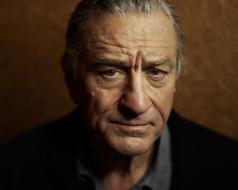 In a new video, the legendary actor calls Trump "so blatantly stupid."

"He's a national disaster," says De Niro. "It makes me so angry that this country has gotten to this point that this fool, this bozo, has gotten where he has."

De Niro's anti-Trump message was recorded for Vote Your Future, which is supposed to be a non-partisan effort urging people to vote.

"This is somebody we want for president? I don't think so. What I care about is the direction of this country. What I'm very, very worried about is that it might go in the wrong direction with someone like Donald Trump. So if you care about your future, vote for it."