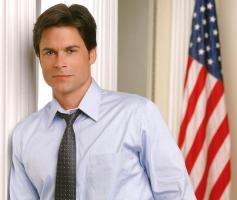 Rob Lowe looked to his past to attack presidential candidate Bernie Sanders' tax plan for higher taxes on the rich.

Lowe said Sanders should stop yelling, especially when he's asking people like him to pay more than their fair share.

"Bernie Sanders is hectoring and yelling at me WHILE he's saying he's going to raise our taxes. Interesting way to communicate," said The Grinder actor.

After some fans questioned why Lowe was against it, asking "Because you can't afford to pay taxes???", the actor turned to 'The West Wing'.

"Attention Sen. Sanders. Sam Seaborn on Taxes," he wrote alongside the clip in which his character questioned why he should be paying "27 times the national average in income tax."

"I paid my fair share," Seaborn says in the scene. "And the fair share of 26 other people. And I'm happy to because that's the only way it's going to work."

"And it's in my best interests that everybody be able to go to school and drive on roads. But I don't get 27 votes on election day. The fire department doesn't come to my house 27 times faster and the water doesn't come out of my faucet 27 times hotter."

"The top 1% of wage earners in this country page for 22% of this country. Let's not call them names when they're doing it is all I'm saying."