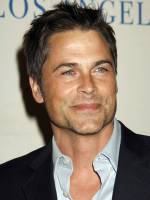 Rob Lowe became the target of Indianapolis Colts fans and sports reporters everywhere after he shared a scoop that Peyton Manning was set to retire.

"Hearing my fave, #18 Peyton Manning will not return to NFL. Wow," the 'Parks and Recreations' star shared on Twitter.

After NFL Network anchor Rich Eisen told him to "get out," Lowe said it was true but he couldn't reveal his sources.

"My people are saying Manning will retire today," he said. "What do you hear?"

"Watching our newsdesk chase down Rob Lowe rumor is very comical... to me anyhow," she quipped. "Think Chad Lowe has any insight on Eli Manning's illness?"

Peyton's agent joked with the NFL Network that if Manning was retiring then it was news to him.

In an appearance on the Ellen DeGeneres show yesterday, the talk show host asked him for the source of the story.

"Ellen, I could tell you but then I'd have to kill you," Lowe replied.