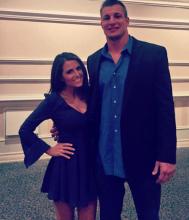 After rumors began to swirl that Gronkowski had become involved with actress-model Marisa Hunter following their recent hosting of an event together, the Patriot is quashing the suggestions.

"Sometimes chicks are crazy... I don't got a girlfriend," he wrote on Twitter.

That finally prompted Hunter, who had been attempting to capitalize on the speculation all week, to address the topic merely minutes later.

"LOL, one picture together and the MEDIA went crazy!," she wrote.