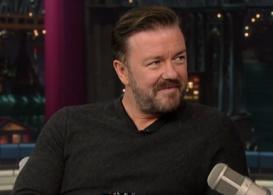 Ricky Gervais tells David Letterman what to expect after he retires.

"That's crazy," says Gervais. "You can't retire. You see, you think you're going to spend more time with your family but they've got a routine. You're going to be in the way."

"You're going to be spending a lot of time in a shed pretending to do stuff."

"You're going to miss this! You're sitting around, other people are talking, you're getting millions. Now you're going to have to listen to people talking and you'll think 'I'm not earning a thing for this.'"

"And you're just like me in the sense that we hate other people. I hide it. It's quite obvious from you," cracks Gervais. "The thing is you can get out of stuff when you're working. When a relative says come over for a barbecue, you can't say 'I can't, I'm in a shed.'"