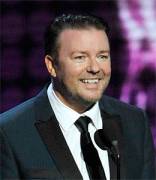 Ricky Gervais was his usual fun self as he took the stage at the Emmy Awards last night.

And while bemoaning the lack of drinks at the Emmys, the 'Office' creator took a jab at Gibson and his recent troubles.

"Hello. Me again. I’m going keep it short and sweet this time. I'm clean. I'm saving all the really offensive stuff for the Golden Globes," he said. "They’re all drunk anyway."

"Not here. No drink here. No drink at the Emmys. No beer, not even backstage. What do they think is gonna happen?," he wondered. "Really that we’re all going to go mental and smack someone’s head? What! What!"

"There’s no one scary here really. I’ve seen people here cry when they break a fingernail. So no one's going to kick off. There’s no tough guys."

"There’s no Russell Crowe. He wouldn’t be seen dead here. It's TV. Or Christian Bale, same. Kiefer's got a few more hours before he gets messy as well. Mel Gibson? Come on, No, come on. I’m not going to have a go at him. He’s been through a lot. Not as much as the Jews, to be fair."

"Who wants a beer, who wants a beer?," he asks as waiters enter deliver bottles to a few takers in the front rows. "The Office is in syndication so those are on me."