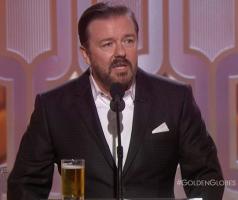 Ricky Gervais returned as Golden Globes host on Sunday night to once again skewer most celebrities in attendance and even some that weren't.

"I'm going to be nice tonight. I've changed. Not as much as Bruce Jenner obviously. Now Caitlyn Jenner, of course."

"What a year she's had. She became a role model for trans people everywhere. Showing great bravery in breaking down barriers and destroying stereotypes. She didn't do a lot for women drivers. You can't do everything."

) made the news when she demanded equal pay for women in Hollywood and she received overwhelming support from people everywhere. There were marches on the street with nurses and factory workers. Saying how the hell can a 25 year old live on $52 million?!"

"Of course, women should be paid the same for doing the same job," Gervais grinned. "I'm getting paid exactly the same as Tina and Amy did last year. I know there were two of them, but it's not my fault if they wanted to share the money, is it?"

After the revelation of Sean Penn's secret interview with notorious Mexican drug lord "El Chapo," Gervais said joked that after the show he would go into hiding so deep that "not even Sean Penn will find me."

"On a serious note, the Golden Globes are about excellence. To win one you have to do something amazing. Neither of our first two presenters have one though. I don't know what they're doing here really. I don't choose the guests. Please welcome the fantastic Channing Tatum and Jonah Hill."

He also took a shot at Affleck: "He's also the only person who Ben Affleck hasn't been unfaithful to. Please welcome, Matt Damon!"

Mel Gibson was s good sport and joked on stage: "I love seeing Ricky once every three years because it reminds me to get a colonoscopy."

Gervais returned the favor by wrapping up the show with: "From myself and Mel Gibson, shalom!"