Ricky Gervais and Elmo Perform Together At Carnegie Hall 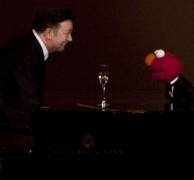 Ricky Gervais invited a special guest as he took the stage at New York's Carnegie Hall.

After the British comedian performed his routine to a sold-out crowd as part of the New York Comedy Festival, Ricky announced he had a surprise to finish the set.

"What's black and white and red all over?," asked Gervais as he welcomed a tuxedo wearing Elmo. The two went on to give a rendition of 'New York, New York' together.

It wasn't the first time Ricky Gervais and Elmo were meeting. The pair had quite the fun on the set of 'Sesame Street' last year.

Check out outtakes from the hilarious visit below: