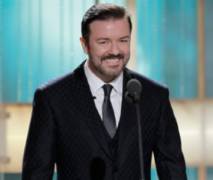 "You don't get used to it. It's always a thrill," Gervais began about being nominated. "You don't expect it either because then you're disappointed."

"I mean the best thing about being nominated for an Emmy is the annoys the people who don't like you. My career has become annoying people," he grinned. "I'm happy if they like it but if they don't like it that's good too."

Asked about it was different to be at award shows in the US and UK, Gervais quipped: "Yeah, there are famous people at American awards shows."

"America sort of really celebrates success. If you win a lot of awards, they say you've won a lot of awards. In England they say 'That's enough. Don't give him anymore.' I've got a love-hate relationship with award shows... and England."

"It's a different vibe. We like the underdog. 'We love him, he's the underdog!' He's won. 'We hate him.' Sometimes it's overnight."

Ricky Gervais also briefly talked about being up against Louis CK -- whose career he helped jump-start before the comedian broke out with 'Louie.'"