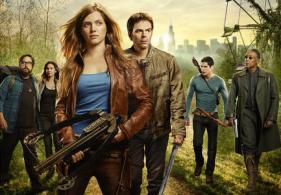 The axe has fallen on several dramas and comedies at NBC, CBS and ABC including 'Revolution', 'Dracula', 'Crazy Ones' and 'Intelligence'.

NBC's 'Revolution' becomes the second JJ Abrams drama to be cancelled after 'Almost Human' was axed by Fox.

It was a steep drop in ratings for the show that was touted as the No. 1 new show lst year. NBC has also pulled the plug on 'Growing Up Fisher', 'Community', 'Believe' and 'Crisis'.

Meanwhile, over on CBS, Robin Williams and Sarah Michelle Gellar's 'The Crazy Ones' was cancelled along with 'Intelligence', 'Bad Teacher', 'Friends With Better Lives' and 'Hostages'.