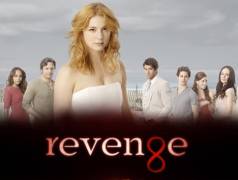 'Revenge's upcoming finale is not only going to end the season but end the series.

"We can officially tell our fans that this will be the end of the story," executive producer Sunil Nayar tells EW.

"We've been talking to the network and we all just wanted to make sure that we felt very confident. Now that everybody has seen the finale -- which is fabulous -- everybody understands that as much as we all adore the show, it has hit exactly the mark it needed to end."

"This is the series finale of Revenge that will be airing in a couple weeks."

After discussions with ABC, writers began wrapping up major storylines in Emily Thorne's complicated quest to avenge the death of her father amid the Hamptons elite.

"They really got the sense with us as their partners that we all came up with a great way to end these stories," Nayar says.

'Revenge's cancellation was inevitable in some respects with the season premiere drawing just over 5 million viewers, down sharply from last season's average of 8.4 million.

The drama's star, Emily VanCamp, thanked fans: "Four unbelievable years with the most incredible cast and crew. Could not be more grateful for the experience. Huge thank you and mad love to all of our devoted Revenge fans over the years! You will never know how much it's meant to all of us."