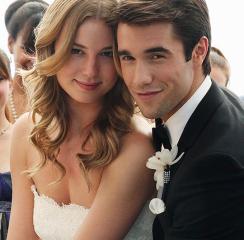 'Revenge' co-stars Emily VanCamp and Josh Bowman have now taken the next step for their off-screen romance.

VanCamp, 30, announced Thursday on social media that she's engaged to Bowman, 29, with a simple red heart emoji and a diamond engagement ring on her left hand.

The pair first began dating while filming the ABC drama in January 2012. They were married on the third season of the series.

VanCamp previously old InStyle Australia that Bowman was a "wonderful love in her life."

"Trust is the most important thing in any relationship because everything falls into place after that."