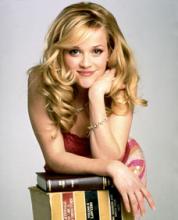 Reese Witherspoon has been cast to play Tinker Bell in 'Tink', a new live-action Disney movie centered on the character.

Details on the project are being kept under wraps. However, Witherspoon will produce with Bruna Papandrea and the script will come from Victoria Strouse, who wrote the script for 'Finding Dory', the sequel to 'Finding Nemo'.

It is expected to be done in similar fashion to 'Maleficent' to delve deeply into Tinker Bell and her motivations and fears.

While the fairy was originally conceived as a minor character in the lore of Peter Pan, she has since become a widely recognised part of the world and, even more so, a Disney mascot.

Disney's Tinker Bell animated film series aimed at young girls with a love of fairies has already earned more than $300 million for the studio.