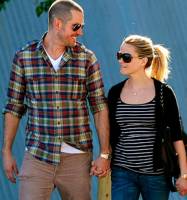 Reese Witherspoon says she's "deeply embarrassed" and "sorry" for what she said to a state trooper when her husband was accused of driving under the influence of alcohol.

"Do you know my name?," Witherspoon is quoted as saying in the state trooper's report. When the trooper said "No, I don't need to know your name right now," she apparently replied "You're about to find out who I am."

She also told him "You are going to be on national news." "I advised Mrs. Witherspoon that was fine," adds the trooper in his statement.

The actress was scheduled for a hearing on Monday morning, but it was reset for May 22.

"Out of respect for the ongoing legal situation, I cannot comment on everything that is being reported right now. But I do want to say, I clearly had one drink too many and I am deeply embarrassed about the things I said," she says in a statement.

"It was definitely a scary situation and I was frightened for my husband, but that is no excuse."

"I was disrespectful to the officer who was just doing his job. The words I used that night definitely do not reflect who I am. I have nothing but respect for the police and I'm very sorry for my behavior."

Jim Toth faces a DUI charge after driving in the wrong lane while Witherspoon faces a charge of disorderly conduct because she wouldn't calmly stay in the car.