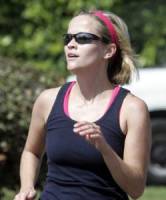 Reese Witherspoon was struck by a car while jogging near Los Angeles on Wednesday morning.

Fortunately, the 84-year-old female driver wasn't driving at a high speed and the actress only suffered minor injuries.

Santa Monica police say Witherspoon was jogging in an unmarked crosswalk when the driver struck her at about 20 mph. The driver was cited for failing to yield to a pedestrian in a crosswalk.

"The driver seemed to have not seen her because of a large tree at the intersection," a witness tells Us Weekly. "She was lucky, because it could have been much more serious."

The 35-year-old actress was taken to a local hospital for treatment but she is now "resting comfortably at home," according to her publicist.