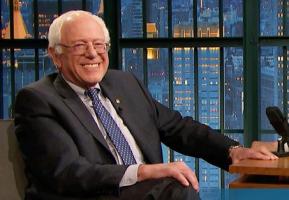 The Red Hot Chili Peppers have endorsed Bernie Sanders and will do a benefit concert for the Democratic presidential candidate.

Calling him a "man with integrity," the band will perform at the Ace Hotel in Los Angeles on February 5.

"So excited to be playing this concert for Bernie Sanders next week," Michael Peter Balzary, better known by his stage name Flea, says in an announcement. "Feels great to support someone I believe in."

"The Red Hot Chili Peppers offered to give him the money to pay for the theater that night but he wouldn't accept, he only accepts small donations from individuals."

"Every other politician greedily grabs every cent they can get from any scumbag lobbyist. This is a man with integrity."

"If you can please buy the expensive seats to help out the campaign. Thank you so much. Bernie sanders for president."