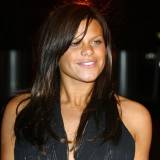 British reality TV star Jade Goody has died after a seven-month battle with cervical cancer. She was 27.

Goody passed away in her sleep early Sunday, which marked Mother's Day in the UK. She was surrounded by her family, including her husband and children, at her home in Essex.

"She had been asleep the past 24 hours and it happened very peacefully," says her representative. "Everyone is, of course, devastated, but we knew this was coming. I'm just glad people are remembering her as a brave girl who took on this battle with courage and gusto. She's inspired a lot of people."

British Prime Minister Gordon Brown was also made a brief statement about Jade: "She will be remembered fondly by all who knew her and her family can be extremely proud of the work she has done to raise awareness of cervical cancer, which will benefit thousands of women across the UK."

Goody was a dental assistant until she rose to fame as a loud and brash contestant on the British edition of 'Big Brother;. She was both loved and ridiculed by fans for her lack of knowledge (she thought Saddam Hussein was a boxer).

She stirred controversy and was accused of racist bullying when she referred to fellow contestant, Bollywood actress Shilpa Shetty, as 'Shilpa Poppadom' and mocked her accent on an all-star season of the show.

In August 2008, she appeared on the Indian version of the show to show she was sorry following the highly publicized incident, but had to withdraw early and return to the UK after being told she had cervical cancer, while still filming.

In February, as the cancer spread to her liver she married fiancee Jack Tweed in a televised wedding at a countryside hotel outside London.