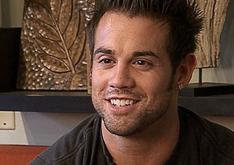 Joey Kovar, who appeared on 'Real World: Hollywood' and 'Celebrity Rehab', was found dead at a friend's house in Chicago on Friday.

The 29-year-old had previously battled problems with cocaine, ecstasy and alcohol addiction and even joined a 30-day rehab, after just a few episodes into the 20th 'Real World' cycle.

"Everyone is in shock right now. He seemed fine, he was happier and he was doing better. Everything was going very well," Joey's brother, David, tells the Chicago Tribune. "The very, very last thing that our family is suspecting is drugs."

An autopsy performed Saturday could not determine the cause of death for the reality star. However, despite his brother's assurances, it is suspected that Kovar died of a drug overdose.

"He would have horrible panic attacks to the point of where he thought he was having heart attacks," says Jared Degado, the president of Muscle Wolf Productions, which recently signed Kovar. "He was prescribed anti-anxiety meds, but he would take so many, he didn't like the way it made him feel."

"So he would take Adderall to bring himself back up. I have a feeling his body being pulled in two different directions just overloaded his heart."

Joey Kovar had commented in 2009 that he believed his honesty about using drugs combined with his personality was why he got picked for 'Real World: Hollywood'.

"We kind of have an 'I don't give a f--k attitude. What you see is what you get," Kovar said. "People want edgy. People want attitude. People want in-your-face, and that's what Chicagoans bring. The attitude we have is what's going to draw the ratings."

In a statement, the network says it "is deeply saddened to learn that Joey Kovar of 'The Real World: Hollywood' has passed away. We offer our sympathies to Joey's loved ones, family and friends."

Kovar leaves behind his 3-year-old son and 2-year-old daughter.