Rapper Tupac Resurrected To Perform As Hologram At Coachella 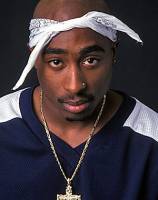 Tupac, who was murdered in 1996, was resurrected at the Coachella festival for a crowd-pleasing performance alongside his old friend Snoop Dogg.

The ghostly re-appearance of the rap legend had fans in a frenzy as they couldn't believe what they were seeing.

"What up, Coachella?," the shirtless MC asked the crowd before bouncing into the classic single 'Hail Mary'.

According to a spokesperson for Dr. Dre, who was behind the vision, the 3D holographic image of Shakur was created by Hollywood effects house Digital Domain, who have credits like 'The Curious Case of Benjamin Button' and 'TRON: Legacy'.