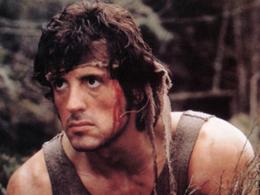 Fox television is reportedly working on a 'Rambo' TV series.

The network is teaming up with Sylvester Stallone, who will executive produce, to develop the project based on the 'Rambo' feature films.

The series will revolve around Rambo and his son. Stallone will likely recur as a mentor on his son, similar to Bradley Cooper's appearances on 'Limitless', another television series spawned from a movie.

Rambo's son will be a former Navy SEAL who has now returned home. It's expected Stallone will pass the torch on the series to his son, following a theme similar to 'Creed'.

The news comes as 'Rambo: Last Blood', a planned movie which would've seen John Rambo single-handedly take on the Mexican drug cartels, has been put on hold.

The trend for making existing big-screen properties into a TV series has been picking up steam in recent years as a way to stand out amongst the crowded television landscape.