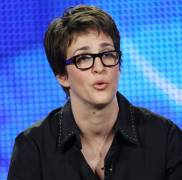 MSNBC host Rachel Maddow talks with Jimmy Fallon about Donald Trump's campaign and why she believes the most powerful people in the country will owe him no matter what happens.

"He's sort of threatening to run as an Independent, right?," says Maddow. "It's actually genius."

"But if he says 'You guys be nice to me or I'm going to jump in as an Independent, thereby guaranteeing Hilary Clinton will be the next president'. What does that mean? That means if he doesn't do that, the Republicans owe him forever. And if he does that, Hilary Clinton becomes president and she owes him forever."

"Nice. So he will never has more power than he has does right now. If he runs as an Independent or he doesn't, half of the country's political infrastructure is going to owe him for the rest of their lives. That is the art of the deal. It's perfect!"