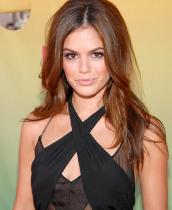 ) goes full attitude in this rap video with her 'Hart of Dixie' co-stars Scott Porter and Wilson Bethel.

Called 'Call Me Doctor', the unexpected rap features Bilson responding to critics of her CW show and asking where's she's been since The OC.

"Critics talking shit about my acting? Nice chick shtick ain't happenin'... Peaced out of 'The OC', Ben and Brody, deuces! Did a couple of movies, drank a couple juices! Still they're comin' at me, like 'Where ya been?' You should be askin' Mischa Barton (photos