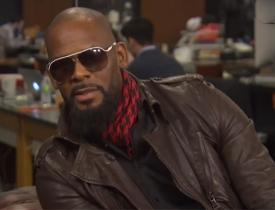 R. Kelly walked off an interview on Monday after the host asked about the sexual abuse allegations that have followed the R&B singer for more than a decade.

The interview began on a contentious note with Huffington Post's Caroline Modarressy-Tehrani and Kelly repeatedly talking over each other. But it took a turn for the worse when the host decided to get serious with the singer.

"What do you say to those people who find it conflicting?"

Kelly, who was on the program to promote his latest album 'The Buffet', became defensive at being her ambushed by the question.

"I don't know where you’re getting your information from," he told her. "I'm a very successful and talented man. I love those that even come against me."

"I know the difference between a negative question and a positive one, so if I think it's negative, I'm going to walk."

When Modarressy-Tehrani suggested he could leave at any time, he responded: "If the next question is something negative out of your mouth, with all due respect, that's exactly what I'll wanna do."

As the host asked about his lyrics, Kelly felt he was still being attacked.

"I did not come here to get interrogated. This is a deposition," he said. "if you don't think you're disrespecting me, then that's the level of your intelligence."

"This is not about music," Kelly said as he walked off. "This is about disrespect."

"You have no video questions for me, because this interview is over."