Quentin Tarantino On Harvey Weinstein: 'I Knew Enough To Do More Than I Did' 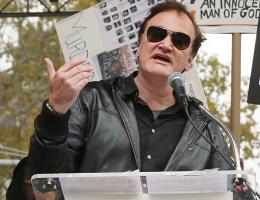 While other actors and filmmakers are proclaiming shock, Quentin Tarantino has admitted that he knew for decades about Harvey Weinstein's alleged sexual misconduct.

"I knew enough to do more than I did," the 54-year-old director tells The New York Times in an interview.

"There was more to it than just the normal rumors. The normal gossip. It wasn't secondhand. I knew he did a couple of these things."

"I wish I had taken responsibility for what I heard. If I had done the work I should have done then, I would have had to not work with him."

Tarantino says he knew about Weinstein's encounter Mira Sorvino as well as his settlement with Rose McGowan.

"I was shocked and appalled. I couldn't believe he would do that so openly. I was like, 'Really? Really?'," he recalls the moment he first learned about it.

"But the thing I thought then, at the time, was that he was particularly hung up on Mira. I thought Harvey was hung up on her in this Svengali kind of way. Because he was infatuated with her, he horribly crossed the line."

"What I did was marginalize the incidents," he now realizes. "Anything I say now will sound like a crappy excuse."

"I chalked it up to a '50s-'60s era image of a boss chasing a secretary around the desk," he says of the things he didn't hear firsthand. "As if that's OK. That's the egg on my face right now."

"Everyone who was close to Harvey had heard of at least one of these incidents," he adds. "It was impossible they didn't."