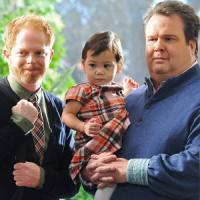 The Parents Television Council and a few other groups are upset over last night's episode of 'Modern Family', which saw Mitchell and Cameron's young daughter utter the F-word more than once.

"It is certainly in poor taste," says Melissa Henson of the Parents Television Council. "Since television is constantly adding to the likelihood that children will be exposed to this kind of language, we will naturally see more and more children eventually emulate that behavior."

Aubrey Anderson-Emmons, who is actually 4, was asked to say 'fudge' during taping but that isn't stopping critics of the episode since viewers got the impression that the bleeped word was actually the F-word.

Steven Levitan, creator and executive producer of the comedy, revealed last week he had to convince ABC to allow the episode.

"We thought it was a very natural story since, as parents, we've all been through this," explained Levitan. "We are not a sexually charged show. It has a very warm tone so people accept it more. I'm sure we'll have some detractors."

"I can assure you she did not actually say the F-word on the show. We said a very innocent word but people are all up in arms about that. This is not child abuse!," joked Jesse Tyler Ferguson, who plays Mitchell.

"We're not making her cuss. What she does on her own time, we don't know," he laughs.