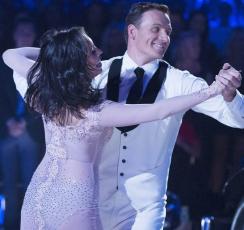 Protesters rushed the stage on Monday's 'Dancing with the Stars' to confront Olympic swimmer Ryan Lochte.

) were in the midst of receiving feedback from judge Carrie Ann Inaba about his debut performance when the protestors attempted to rush the stage.

"Hey, back off," Inaba said as the altercation was occurring off screen as ABC immediately cut to an unscheduled commercial break.

When 'Dancing' returned, host Tom Bergeron explained they were interrupted by "a little incident" and thanked the security team "for staying in shape."

Two men, wearing anti-Lochte T-shirts, were detained by security until police arrested them for criminal trespassing.

"So many feelings are going through my head right now," Lochte told Bergeron. "I'm a little hurt, but I came out here. I wanted to do something I'm completely not comfortable with, and I did."

The Olympic medalist and Burke received a combined score from the judges of 24 out of 40 for their foxtrot routine to 'Call Me Irresponsible'. The song choice was no accident since Lochte called himself irresponsible after being caught lying about being held at gunpoint in Rio, Brazil last month.

This is the cause of the #DWTS disruption. More to come. pic.twitter.com/0AMkY6P2a1