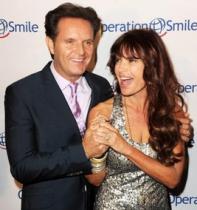 The husband and wife team of executive producers Mark Burnett and Roma Downey on History Channel's 'The Bible' miniseries have responded to controversy stemming from Sunday's episode.

The episode, which revealed the face of Satan for the first time, had many viewers commenting on the similarity between the actor playing the devil and President Barack Obama.

"This is utter nonsense," say Burnett and Downey. "The actor who played Satan, Mohamen Mehdi Ouazanni, is a highly acclaimed Moroccan actor. He has previously played parts in several biblical epics -- including Satanic characters long before Barack Obama was elected as our president."

"We have nothing but respect and love for our President, who is a fellow Christian. False statements such as these are just designed as a foolish distraction to try and discredit the beauty of the story of The Bible."

The History Channel also released its own statement, saying there was no hidden message behind the depiction of Satan.

"History Channel has the highest respect for President Obama," says the network. "The series was produced with an international and diverse cast of respected actors."

"It's unfortunate that anyone made this false connection. History's ‘The Bible' is meant to enlighten people on its rich stories and deep history."