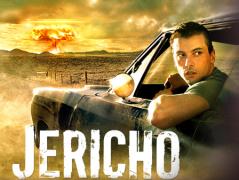 In an interview with TV Guide, 'Jericho' executive producer Carol Barbee had some rather interesting things to say about season 2 of the series, and their contingency plan if the series was to get cancelled after the shortened seven episode season.

Barbee says the next time we see Jericho, the town is once again in total chaos: "We leave on the brink of war with New Bern. The government has broken up into factions and there are several people claiming to be the legitimate government. One of them is in Cheyenne, Wyoming, so the Cheyenne government comes to town."

Barbee didn't want to reveal all but did say "they're there to stop the war with New Bern but they're also there for a secret agenda." An agenda that includes finding Hawkins, who used a tracking device in the Season 1 finale before realizing it could be traced.

"They don't know that they're hunting Hawkins. But they know they're hunting what they call a terrorist with a nuclear bomb. So Jake is going to have to help Hawkins stay out of the clutches of the Cheyenne government.

"Essentially, they're going to be occupied," she says. "A lot of things happen when they're under occupation."

As for a possible series finale, she says they shot an alternate ending in case ratings don't pick up and CBS decides to cancel the series.

"The ending that we planned was always meant to be a payoff for the seven-episode arc. It won't close off the whole story but it will show you where we would go in a third season." And If the show isn't renewed, the alternate ending will give "you a huge mythology so that you understand so much about what has happened."

Often, shows get cancelled abruptly without any pay off for loyal fans, and while we hope the shows makes it to a third season, 'Jericho' producers deserve plenty of credit for the contingency plan.

Season 2 is tentatively scheduled to launch in January, but could air sooner if one of CBS' new fall shows gets cancelled mid-season.