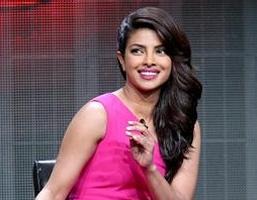 'Quantico' star Priyanka Chopra is recovering after an on-set accident while filming the ABC drama in New York.

The 34-year-old Chopra was rushed to the emergency room after she slipped and hit her head while performing a stunt.

A spokesperson for ABC says it was a "minor incident" and Chopra was examined by a doctor and subsequently released.

"Thank you for all your warm thoughts and well wishes," she told fans while resting at home on Sunday. "I will be ok, and am looking forward to getting back to work as soon as I can. Much love."

'Quantico' follows Chopra as FBI agent Alex Parrish, who joins the CIA after being framed for a major terrorist incident in the US. Production has not been delayed and she is not expected to miss any time.