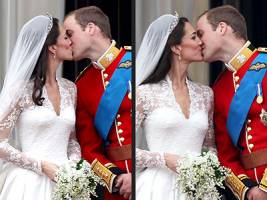 After the wedding dress was revealed and the vows were exchanged, Prince William and Kate Middleton obliged their subjects with a kiss on the balcony of Buckingham Palace.

And not once, but twice after the public began a chant for William and Middleton to kiss for a second time. This time it was slightly longer.

Prince Charles and Princess Diana started the tradition of the balcony kiss.

More than 180 countries around the globe are said to have shown the Royal Wedding.

See a play by play of the kiss from the BBC: