Prince Harry Reveals He 'Wanted Out' of the Royal Family 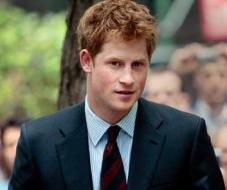 Prince Harry says in a new interview that there was a time when he didn't want to be a member of the royal family.

"I felt I wanted out but then decided to stay in and work out a role," the 32-year-old tells Newsweek, saying he wanted to be "something other than Prince Harry."

Harry explains he considered giving up his title after 10 weeks in Afghanistan in 2007.

"I spent many years kicking my heels and I didn't want to grow up. It was the best escape I've ever had."

"I felt as though I was really achieving something. I have a deep understanding of all sorts of people from different backgrounds and felt I was part of a team. I wasn't a Prince, I was just Harry."

"I felt I wanted out but then decided to stay in and work out a role for myself. We don't want to be just a bunch of celebrities but instead use our role for good," he explains.

"I didn't want to be in the position I was in, but I eventually pulled my head out of the sand, started listening to people and decided to use my role for good," he says.

"I am now fired up and energized and love charity stuff, meeting people and making them laugh. I sometimes still feel I am living in a goldfish bowl, but I now manage it better. I still have a naughty streak too, which I enjoy and is how I relate to those individuals who have got themselves into trouble."