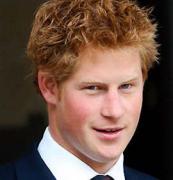 According to TMZ, the photos (link) were taken after Harry invited girls up to his VIP suite after meeting them in a hotel bar and the group decided to play a game of strip billiards.

In one photo, the 27-year-old prince stands covering his private parts with his hand as a seemingly nude woman hides behind him.

The second photo shows Harry wrapping his arms around another naked woman, with his bare butt facing the camera.

After initially brushing them off with a "no comment," the photos have been confirmed as genuine by a Royals spokesperson.