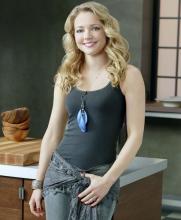 Police have charged a North Carolina man with first-degree murder in the deaths of Cristie Schoen Codd and her husband.

Codd was best known for her season 8 participation on 'Food Network Star'. She was five months pregnant with her first child.

Robert Jason Owens, who did odd jobs for the couple at their house, is being held without bond.

Cristie Schoen Codd and Joseph Codd had been reported missing on Sunday. Police haven't disclosed where they found the couple's bodies and reports indicate they were murdered on Thursday.

This isn't the first time Owens has come on the police radar. In 2000, he was the primary suspect in the disappearance of college student Zebb Quinn, whose body was never found.

Authorities had video of Owens and Quinn together the night he went missing. However, without a body, they never had enough evidence to charge Owens.