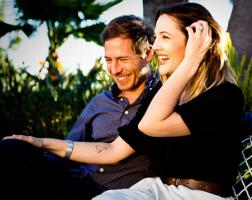 The pregnant actress, who wanted to walk down the aisle before becoming a mom, tied the knot in front of two hundred family and friends in a Jewish ceremony officiated by the Kopelman family rabbi.

The 37-year-old, who has been married twice before, has told friends she's "finally ready for a quieter, more family-oriented life."

"He has this incredible family," she told Ellen DeGeneres in February. "I am as in love with his family as I am with him. Which is an extraordinary sort of gift. You never take that for granted. It really is an absolute blessing. I feel very lucky. They're incredible people."