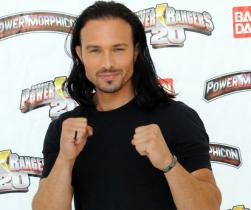 Former 'Power Rangers' star Ricardo Medina Jr has pleaded guilty to voluntary manslaughter in the death of his roommate, who was stabbed to death with a sword.

He was arrested and charged last year in the killing of Josh Sutter in 2015.

Prosecutors claimed Medina got into an argument about his girlfriend with Sutter that turned violent.

Medina said Sutter followed him into the bathroom at their Green Valley home and, after he forced the door open, he stabbed Sutter with a sword kept next to the door.

Medina narrowly avoided a murder charge that could have landed him a sentence of 26 years to life.