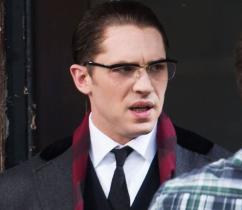 The marketing team behind Tom Hardy's 'Legend' is garnering both praise and disdain after brilliantly hiding a 2-star review in its poster.

The film has earned mostly positive 4-star and 5-star reviews that praise Hardy for a career-best performance. But the UK's 'Guardian' declared it a disappointing film with a two-star review.

However, rather than try to hide the review or risk not featuring a review by the UK's top newspaper in its poster, the British film cleverly placed the 2-star's front and center on its poster among other 4-star reviews to make it look like the missing star's are obscured by the star's figures.

The critic who handed the film the 2-star review pointed out the trickery on social media.

Incredible way of making my two star review seem like I didn't hate the film pic.twitter.com/zvOyIxHQ3h