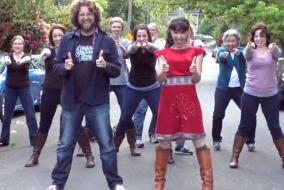 Portland actor Isaac Lamb wanted to do something unique to get his girlfriend of six years, Amy Frankel, to say yes.

"I told my girlfriend to meet me at my parent's house for dinner," says Isaac. "When she arrived I had stationed my brother to sit her in the back of an open Honda CRV and give her some headphones. He 'wanted to play her a song.'"

Family and friends jumped out and lip-synched to Bruno Mars' 'Marry You' as Amy sat in the back of the moving car and enjoyed the show.

When Isaac finally showed up at the end of the performance and got down on one knee, in a suit, she couldn't help but say 'yes'.

But one thing Isaac didn't expect was that his 'Live Lip-Dub proposal would go viral and liked by millions of others.

"It's crazy," says the 31-year-old. "I thought friends and family would like it, and I figured that's where it would end. I can't believe it."

"When I decided to ask Amy to marry me, I wanted something she wouldn't forget."