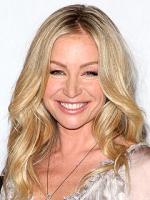 Portia de Rossi has joined 'Scandal' with a multi-episode arc next season.

"So annoying when people brag on Twitter," she wrote.
And that's why I'm not tweeting that Portia just signed on to do a top secret arc on 'Scandal'. Oops."

de Rossi has previously starred on ABC's 'Better Off Ted' but this will be her first appearance on the small screen since the resurrected 'Arrested Development'.