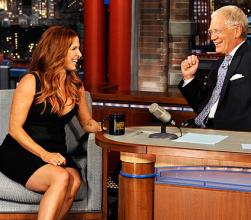 Poppy Montgomery had some big news to share with David Letterman in her appearance Wednesday night.

The 'Unforgettable' star announced she is expecting her third child, and second together with husband Shawn Sanford.

Montgomery, who is six months pregnant, wore a tight black dress with a deep neckline for the announcement and said she had still been filming and doing her stunts on the series.

"I've been filming my show, I've been doing all my stunts and running and leaping, but I haven't told anybody because I didn't want them to treat me differently, but I do. I want people to give me their seats. I want them to open doors," she laughed.

"We're still filming right now, so it's pretty wild," she said. "My costars] all going to be really surprised when they watch this show tonight. They're going to feel bad for making me hang off that roof like I was about to drop."

In a separate appearance on 'The View' that has been taped but will not air until Friday, Montgomery said: "I haven't told anyone yet, so people just think I have enormous boobs. I was like 'I wonder if they think I went and got a boob job?'"