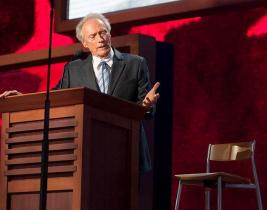 Two surveys conducted by Harris Poll among those eligible to vote has found that Americans would vote for Clint Eastwood over Donald Trump by a margin of three to one.

"While Donald Trump may be leading the polls for the GOP candidacy, his support is tempered at best," says the company. "When asked in July which presidential candidate U.S. adults would most want to see drop out of the running, Donald Trump (41%) leads the pack, above Hillary Clinton (25%)."

"47% of those in the West vs. 37% in Midwest would like to see Trump's name dropped from the ballot."

"When asked in the July survey who they would cast a vote for between a current presidential candidate and a potential celebrity, more often US adults chose the celebrity over the actual candidate. Clint Eastwood beats Trump in that situation three to one."

Though in this case Eastwood actually has more political prowess he was the mayor of Carmel, California, from 1986 to 1988.

When pitted against each other, 72% selected Clint Eastwood versus Donald Trump's 28%. George Clooney was the preferred choice of 57% over 43% in support of Jeb Bush. It even made for some odd pairings like Bernie Sanders (54%) vs Jerry Seinfeld (46%) and Hillary Clinton (55%) vs. Oprah Winfrey (45%).

The poll asked Americans specifically which celebrities would make a good president, without lining them against a current candidate.

Morgan Freeman came out on top with nearly one in four Americans (23%) saying he would make a good Commander in Chief while Clint Eastwood (20%) and Jon Stewart (16%) followed.