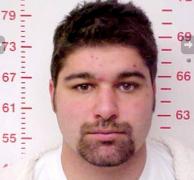 Police foiled a Missouri man's plot to shoot up a movie theater during a screening of the latest 'Twilight' film.

The 20-year-old, Blaec Lammers, is now facing three felony charges for the alleged shooting plot after his mother tipped off police to the plan.

This after she was worried that her son had purchased two assault rifles and hundreds of bullets -- weapons similar to those used during the fatal Colorado theater shooting.

When he was questioned that afternoon, Lammers admitted to police that he had purchased a ticket to a Sunday screening of
'Twlight: Breaking Dawn Part 2' and planned on shooting the people inside.

"Thankfully we had a responsible family member or we might have had a different outcome," says Police Chief Steve Hamilton.

"It looks like everything was done appropriately at that time. The average person will look at it and say 'Why was he not charged criminally?' And the reality is the law only allows so much when a person is having some mental issues."

Lammers is now under a doctor's care for mental illness. He is jailed in Polk County on $500,000 bond.