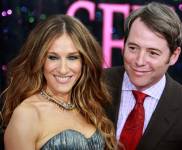 Former Ohio police chief Barry Carpenter has been sentenced to prison for breaking into the home of Sarah Jessica Parker's surrogate.

Carpenter, who resigned from his post two weeks ago when he was convicted on charges of receiving stolen property, theft and evidence tampering, has been sentenced to two years and eight months in prison.

He is said to have broke into the surrogate's home in May looking for information, photos and souvenirs relating to the pregnancy that he then tried to peddle to tabloids.

One tabloid turned Carpenter and his accomplice Bridgeport Police Chief Chad Dojack, who is scheduled to stand trial on similar charges, into authorities after discovering how the material was obtained.

Michelle Ross, the surrogate who later gave birth to the star couple's twins, was not at home during the incident. She told the court that she returned home to find that ultrasound photos, surrogacy files and tax information were gone.

In his testimony, Carpenter said that he saw a door to the home open and went in to check it out. He claimed he took photos of the surrogacy file that contained two ultrasound pictures and a plaster cast of a pregnant stomach but didn't take anything from the home.

Carpenter was acquitted on charges of burglary and unauthorized use of services or he could have received as much as six years in prison. His attorney says he plans to appeal the sentence.