Playboy Playmate Gets Nine Years In Prison For Shooting Husband 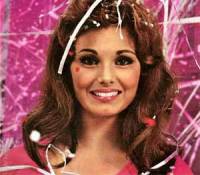 A former Playboy Playmate has been sentenced to nine years in prison for shooting her husband.

Victoria Rathgeb, who posed nude (uncensored link) for a 1967 issue of Playboy, was sentenced after pleading no contest to attempted voluntary manslaughter after shooting of her husband of 25 years during an argument.

Rathgeb posed for the magazine under the name of Angela Dorian.

The exposure helped her land TV and movie roles in the following years, including a role as a recovering heroin addict in the 1968 horror hit 'Rosemary's Baby'.

The now 66-year-old had first told police that a drug dealer pulled the trigger. However, Rathgeb later admitted she shot her husband under the influence of alcohol and methamphetamine because she suspected he was cheating on her.

In addition to the prison time, Rathgeb has been ordered to pay $70,000 to California's victims restitution fund.