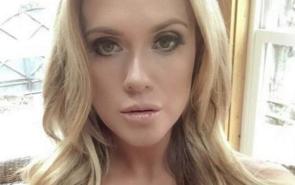 A Los Angeles County Coroner has found Playboy model Katie May died as the result of visiting a chiropractor for an adjustment.

May, who died at the age of 34 in February, apparently died from a blunt force injury that tore her left vertebral artery after a visit to the chiropractor, according to her death certificate.

The fatal tear to an artery in her neck cut off blood flow to her brain. It also says the "accidental" injury was sustained during a "neck manipulation by chiropractor."

May went to the chiropractor to get "adjusted" after she thought she "pinched a nerve" in her neck while doing a photo shoot.

May was a single mother to her 7-year-old daughter, Mia. Her family is aware of the coroner's findings but has not commented comment on whether they will pursue legal action against the chiropractor.