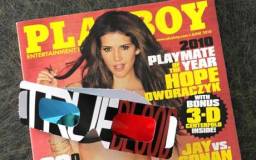 Playboy magazine will no longer feature nude women as part of a redesign that will be unveiled next March.

The magazine that spearheaded America's sexual revolution will still feature women in provocative poses -- but they will no longer be nude.

The redesign comes as Playboy's print circulation has dropped from 5.6 million in 1975 to about 800,000. The move will be quite a turn for the publication that debuted in 1953 with Marilyn Monroe on its cover.

"If you're a man between the ages of 18 and 80, Playboy is meant for you," founder Hugh Hefner wrote in his first editor's letter. "We enjoy mixing up cocktails and an hors d'oeuvre or two, putting a little mood music on the phonograph, and inviting in a female acquaintance for a quiet discussion on Picasso, Nietzsche, jazz and sex."

A little known fact is that Hefner didn't include a date on the cover of the first issue because he wanted the issue to live on in infamy if it didn't ever make it to a second issue.

The digital editions and member areas of Playboy will still include all the photos you would expect.

However, the magazine hopes by adopting a cleaner look free of nudity in its print edition, it can attain shelf space where it had previously been restricted and higher circulation to save the paper edition.