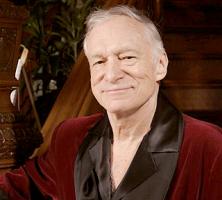 The man who built an empire that began with the magazine that led to a sexual revolution passed away on Wednesday night. Hefner died of natural causes at his home surrounded by family.

Hefner published the first issue of Playboy in 1953, featuring naked photos of Marilyn Monroe that had been taken years earlier.

Within five years, circulation of the magazine topped 1 million. At its peak in the 1970s, the magazine had a subscription of 7 million.

Hefner once told The New York Times that, despite his millions, he was proudest of knowing: "That I changed attitudes toward sex. That nice people can live together now. That I decontaminated the notion of premarital sex. That gives me great satisfaction."

The Playboy founder will be buried in a Los Angeles cemetery next to Marilyn Monroe, in a plot that he bought more than two decades ago for $75,000.

Hefner is survived by his wife Crystal as well as his daughter, Christie, and his sons, David, Marston and Cooper.