Playboy Magazine Bringing Back Nudity, Admits Removing It 'Was a Mistake' 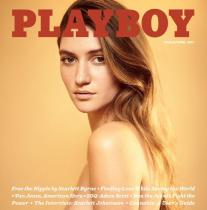 Playboy magazine is bringing back nudity to its print edition.

The magazine that spearheaded America's sexual revolution made the decision to get rid of nudity in October 2015 and put it into effect beginning with the March 2016 issue.

The publication still featured women in provocative poses, while keeping the nudity for its uncensored online offerings, but it now admits that the decision was a mistake.

"I'll be the first to admit that the way in which the magazine portrayed nudity was dated, but removing it entirely was a mistake," says Playboy's Chief Creative Officer, Cooper Hefner, Hugh Hefner's son.

"Nudity was never the problem because nudity isn't a problem. Today we're taking out identity back and reclaiming who we are."

"This is a remarkably special moment personally and professionally that I get to share this issue of Playboy magazine with my Dad, as well as with readers. It is a reflection of how the brand can best connect with my generation and generations to come."

When the decision was made, Cooper said he was one of the few dissenting voices at Playboy.

"I was essentially asked to no longer participate in the board meetings because I didn't agree with his vision for the company," he said. "You either sort of take a step back and say, 'Ok, I'm going to let this happen' or you try and do something about it."