Pink Taken To Hospital After Falling Onto Barricade at Show 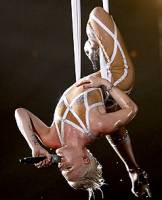 Pink was taken to hospital after a stunt went wrong and she fell off the stage straight onto a steel barricade.

The painful mishap took place at a Nurnberg, Germany concert on Thursday while the singer was suspended in a harness. The 30-year-old climbed back onto the stage after the incident, but the concert was halted and she was taken to hospital.

Pink has performed the feat numerous times in her trapeze-heavy shows, including at the Grammys -- when she almost suffered a similar fate.

"I thought I was going to fall on my nude butt," she exclaimed after the performance. "But I worked it out."

However, she wasn't so lucky in Germany.

"To all my Nurnberg fans," she wrote on Twitter. "I am embarrassed and very sorry but I will be fine. I didn't get clipped in to harness correctly, drug me off stage, and fell in to a barricade."

"I hope it at least looked cool!," she joked.

"Nothing's broken, no fluid in the lungs," she said after the checkup. "Just seriously sore."