Pink To Perform The National Anthem At 2018 Super Bowl 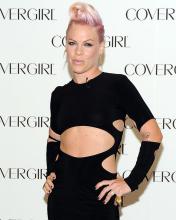 Pink will perform the national anthem before the kickoff at the 2018 Super Bowl.

The NFL has announced that the pop star will perform 'The Star-Spangled Banner' before the February 4 game at US Bank Stadium in Minneapolis.

Past singers to perform the national anthem at the high-profile event have included Luke Bryant, Idina Menzel, Kelly Clarkson and Alicia Keys.

As previously announced, Justin Timberlake will headline the halftime show.

It will be his first performance at an NFL event since he exposed Janet Jackson's breast in the "wardrobe malfunction" (uncensored link) seen around the world.